The experiment: The Battle of Hooks

The experiment: Captain Hook "The Battle of Hooks"

with final appeal to the entire hook industry!

After the question always arises on social networks, how it behaves with broken and bent hooks, our decision was clear: The next experiment is on!
. Even certain fish can be responsible for this, such as grass carp only on the top of the hook, etc. , we wanted to find out. So we tested the most common models for bending and breaking and in the truest sense of the word! So the goal was to find out which stress the hooks begin to deform and when they would lose their hold, that is, whether and when they ultimately break or turn completely! As you do with an experiment, we did without prejudices , act to the best of our knowledge and belief and let the facts speak today! My interpretation afterwards was carried out taking into account the other Angel factors, such as tensile forces that occur in the drill.

for the expiry of tests and experimental setup

Dennis praise (sanitary-heating ventilation maker master and welding specialist, as well as carp anglers with record fishing over 30 kg ) attached an analogous scale to a stable device horizontal, spent every single hook by using The strongest cord in our house and then pulled evenly more and more. The scale was always checked for zero. We observed when the hook would start to deform and to leave the elasticity limit . To do this, had to be relieved again after each further kilo and the hook had to be compared with the exact form of the original (in the top right on each fact sheet ). One look at the pointer of the scale, the other on the deformation of the hook. All tests were carried out 3 times and the mean value. Likewise, the same person (Dennis Pries) has always read the scales and the other person (Max Nollert) assessed the deformation. The read values ​​have a low tolerance . However, since all tests were always carried out by the same people under the same conditions, the values ​​given serve as solid reference and thus perfectly for comparing the tested hooks.

Basic ideas were to be tested, which led us to a total of 4 train tests in two categories.

Test 1: Top stress up to the deformation (elastic limit exceeded for the first time)

Here pressure was exerted on the tip of the hook only until the hook showed its first minimal deformation and, after relief, no longer returned to the starting position . A hard rubberized object with a solid core was used to simulate the mouth of a grass carp, for example. This is where hooks often have a lot deeper than penetrating the tip.

Here there was also pressure on the tip of the hook, identical as in the first attempt, but this time until the hook either broke or bogged and thus "injected" the hard rubber.

Test 3: Straw directly on the hook arch until the first deformation

Here, the traction was exercised with a metal rod directly in the hook arch and also noted until the first deformation entered and even when it was relieved of the form of origin.

Test 4: Straw directly on the hook arch until failure


Interpretation of the results

Now we ask us the following question: What conclusion and benefit do we draw from this experiment?!

To answer this question, a small history is required.

As already mentioned above, we continuously observe not only the development of the hooks on the European fishing market, but also the needs of the anglers and what is discussed! our personal striving for perfection and always have the best product on the market is our motivation! We found that more and more pictures and questions about broken and bent hooks appear on social media pages. So we got to the bottom of the matter and made the tests mentioned above to the best of our knowledge and belief.

We first tested all Carp'r'us hooks of our range and shortly afterwards a range of the hooks of other brands,

, which in our assessment mostly sold, and a completely new Model, whose traditional charm explicitly points out that they are better than anything else on the market - we were excited! On the part of the manufacturers, two different forms of the claim for border loads emerged on one catch: breaking or turning completely! If you now believe that the bending would basically bring more security, because the deformation with softer steel, which later does not break, occurs much earlier than that of hard steel. It is very crucial that this strong deformation of softer hooks even occurred in part even with tensile forces, which can certainly occur in drills strong carp! Hard steel, which only breaks with very high loads, which we do not find during the drill is ideal for fishing.

tensile forces in the drill

In order to understand this better and to be well prepared for evaluating the test results, we again look at the strength that arises in a drill.

Average forces arise on the cord and hooks in the carp drill from to 2kg , only in Exceptional cases up to 4 kg of tensile force! Unimaginable? When the idea (please do not do) it should now be clear that the effort on the biceps is caused by the lever of the rod and not by the actual traction at the end of the cord! We have already prepared an experiment that we will put online shortly.

Now one thing is clear and very important:
We do not need to withstand the 25kg tensile force. Because in principle we want an optimal compromise from as low as possible steel thickness and the associated lower hook weight as well as maximum sharpness and stability! The thinner material thickness also has the advantage that the hook is easier in the Carp mouth can penetrate what is one of the essential factors for successful hooks, which is mostly careful, which mostly have very hard mouths. thick hooked hooks are more difficult to penetrate here! Please note this when looking through the fact sheets and/or table. My friend Rene Rex even goes so far that he does not give his assembly an absolute pivot point, so that he is more likely to hook large carp in the Maulwinkel than on the lower lip. Here the skin is mostly softer ...
what we need is a hard hook ,
which retains its shape as long as possible in order to maximize the hold in intense drill and thus reducing the risk of exclusion. So it is preferred for practice to be tougher steel, which only begins to bend with a higher traction than would be a soft steel of the same diameter and therefore has a longer stop!

only later with very high, not in practice, this would break < Span>.

Attention - Important:
& gt; & gt; Hooks that bend up to complete deformation, in which any hold in the carp mouth becomes impossible, indicate the use of softer steel, here we run the risk, provided that this bend occurs early to lose the fish unnecessarily & lt; therefore cru does not use soft steel.

According to my observations, I personally believe that well -known manufacturers have reconsidered their hook production about two decades ago, since they were confronted with breaking hooks (e.g. solving hangers, etc.) and then incorrectly from uncertainty about the facts and conditions Have made materials softer in order not to be confronted with breaking hooks. More fish loss Due to the hooks that are bending too early, the result was why you deviate from it again!

In the further course of about a decade, the teflon coating of the hooks on the part of the manufacturers was used, to take its light reflection. and that is exactly what the stupid side effect has that due to the second heating It needs to apply Teflon that the metal of the hook became softer. We are talking about less to strong nuances, but if you take a look at the fact sheets with the corresponding hook models, becomes clear where tougher or softer steel is used. carp ' R'Us hooks are treated in a very special way!

Information on the special steel nature and coating of the Carp'r'us ATS hooks, you can find here - click!

Anyone who looks at the facts of the tests, taking these aspects into account, will find their model and know why!

My favorites: The Carp 'R'us ATS Continental Snag Hook Centurion 2000 , which, depending on the desired rig, differ from hook arches and thigh length.

Why these catches? Quite simply, they combine the optimum of sharpness, hardness, stability and lightness! The specially treated steel is not too thick and can therefore easily penetrate into the carp mouth. In addition, the reflection of the material was reduced to a minimum thanks to the Carp'r'us ATS technology without heating the steel. This avoids the risk that the hook becomes too soft when manufacturing.

An appeal to the hook industry and ongoing charm!
In the future, on the hook packs of all hooks, whether for carp fishing, fishing, predatory fishing, sea fishing etc.

, just like with the cord, not only the thickness in diameter but also the tear resistance and/or linear load capacity in KG . We will encourage Carp'r'us to implement this as soon as possible. in this sense "Hook and rope break!" 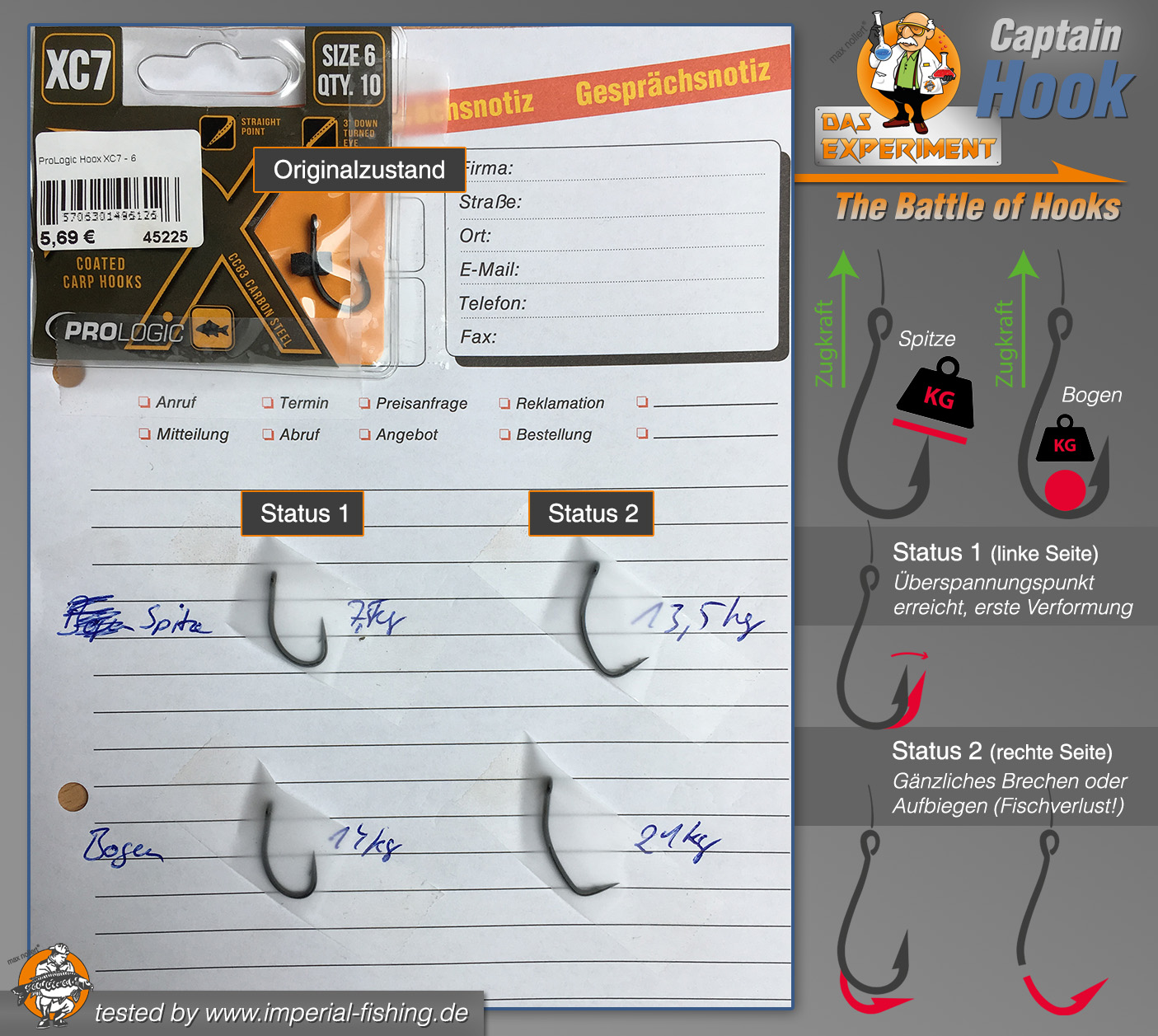 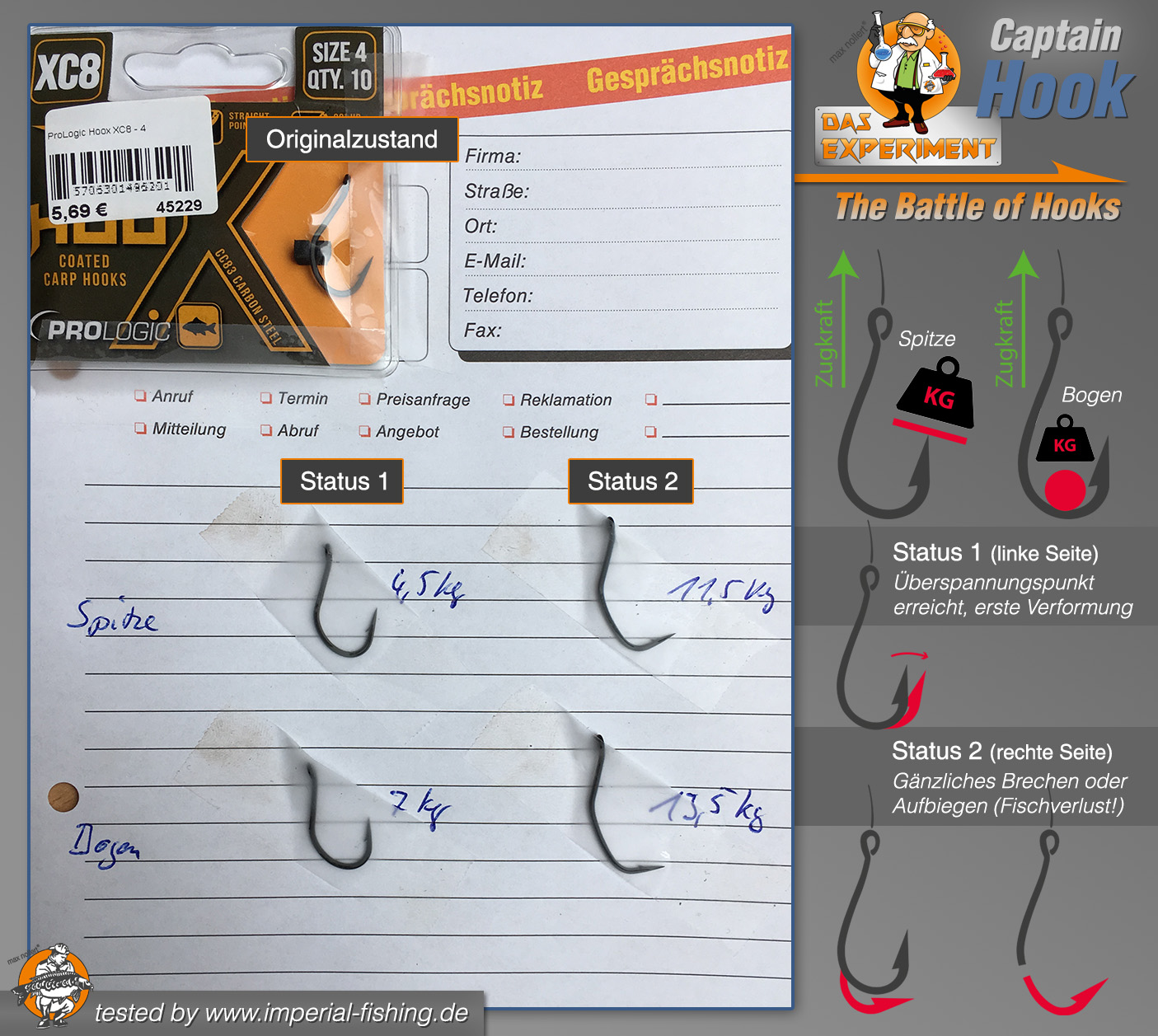 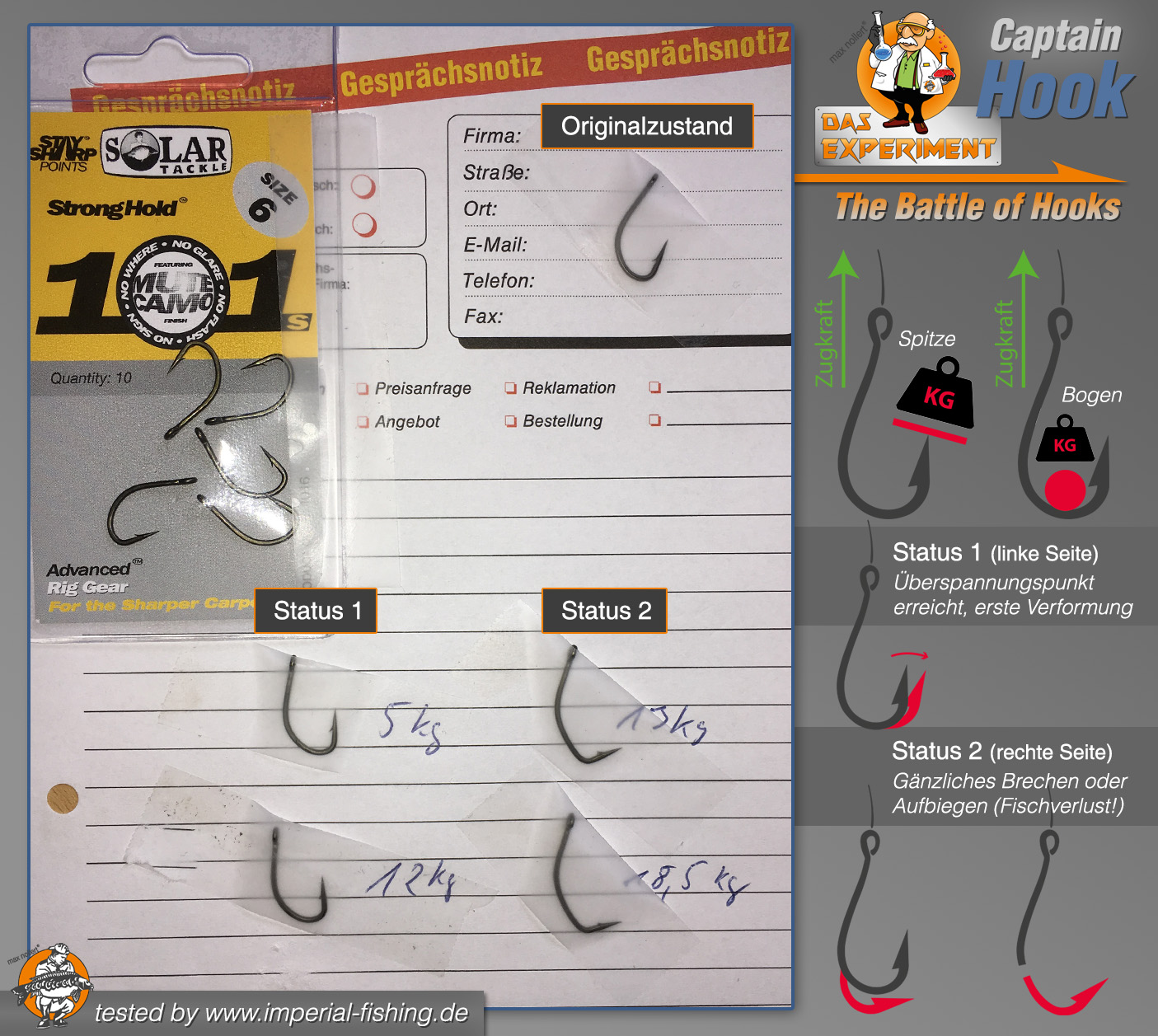 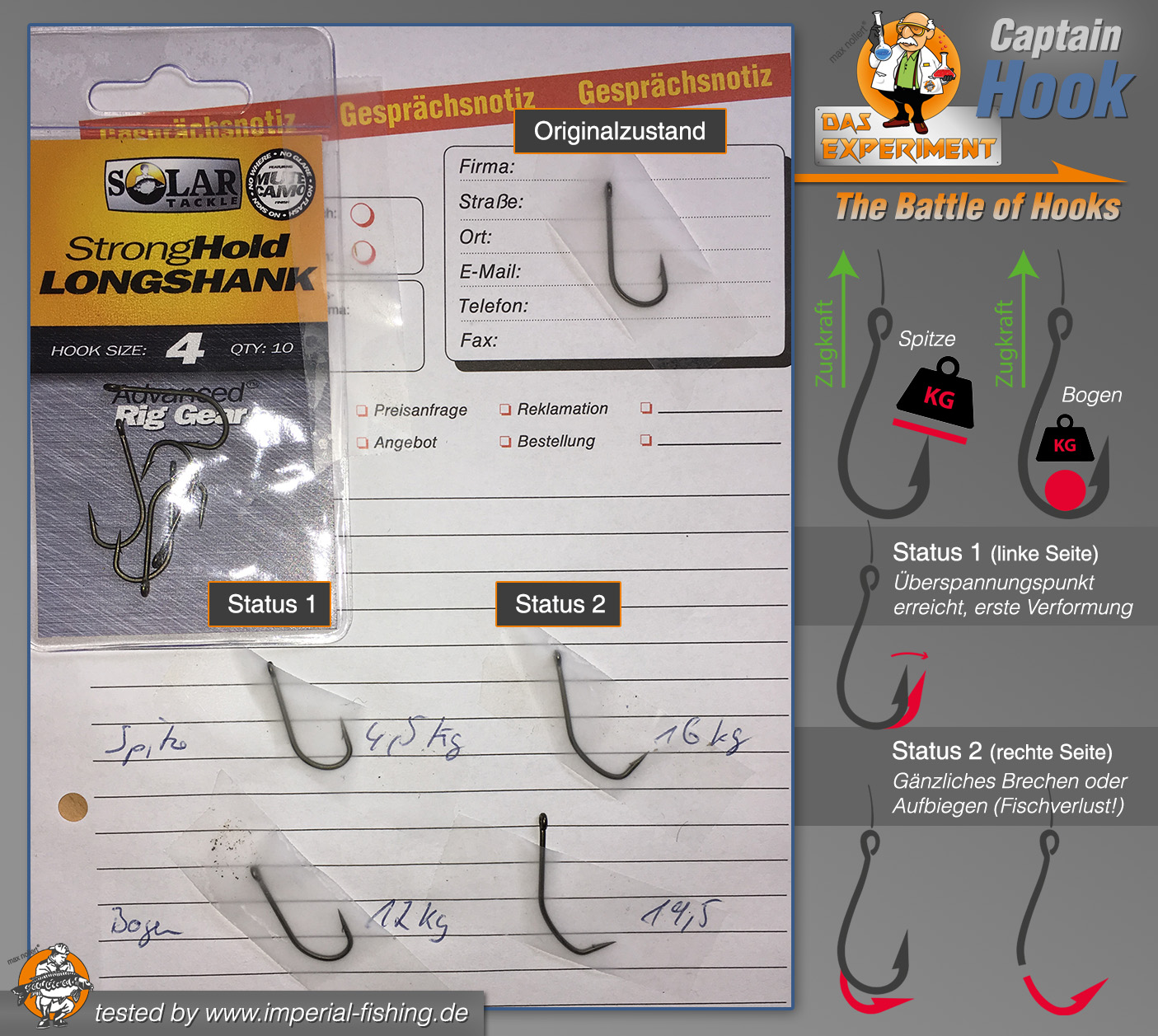